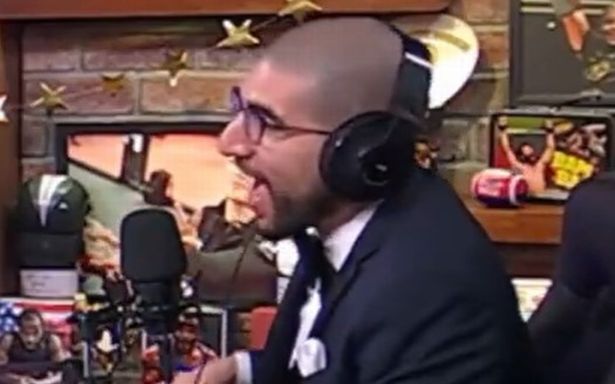 Sports broadcaster Ariel Helwani has been hailed by PDC chairman Eddie Hearn after being contacted by US broadcasters about darts in the wake of a thrilling World Championship final.

Helwani tweeted a clip of him talking about the Ally Pally finale and Michael Smith’s nine-darter, which has gone down as the greatest leg in the sport’s history, with Michael van Gerwen only just missing out on one himself.

In the clip, Helwani, who works for HBO, lauded the moment and highlighted Wayne Mardle’s iconic “I can’t spake” piece of commentary.

READ MORE: Eddie Hearn predicts blast off for darts in the United States with ‘statement event’

The Canadian said: “What about the darts over the last few days?,” he asks his guests.

“Have you watched that clip of the nine-darter? The announcer was like ‘I cannot speak, I can’t speak. Also, that Ally Pally crowd that I’ve learned so much about… I’ll tell you guys right now, I’m heavily campaigning for HBO to send me to that so I can do a real sports story on that culture.”

Hearn, who has taken over as the head of the PDC from dad Barry, now president, soon tweeted his appreciation.

“Ariel – I don’t want to give you too much clout but you are about to be a catalyst for the explosion of darts in the US @OfficialPDC.”

Helwani replied: “I am ready and willing to be the Howard Cosell [legendary US sports broadcaster].”

Hearn then added: “We’ve had two US broadcasters contact us today to talk darts events – The power of Helwani!”

The broadcaster was pleased to lend a helping hand, adding: “Fantastic! When shall we discuss my role as face of North American Darts? We are taking this to the next level.”

Hearn then said: “No rehearsal required – you are our man!”

Do you think darts can become big in the United States? Tell us in the comments section below

Growing the sport in the US is a priority for Hearn and the PDC. Amid the crowded sporting market in America, darts has struggled to gain a foothold stateside, but that could be about to change.

The organisation held a successful US Darts Masters tournament, part of the World Series, at New York’s Madison Square Garden last year and the event will return to the legendary venue this June.

Speaking last year about his plans for darts in the US, Hearn told USA Today Sports “This event is the start of the American journey. Not only can everybody play darts, it’s more than that, the live spectacle is so much fun. I really believe it has great potential.”