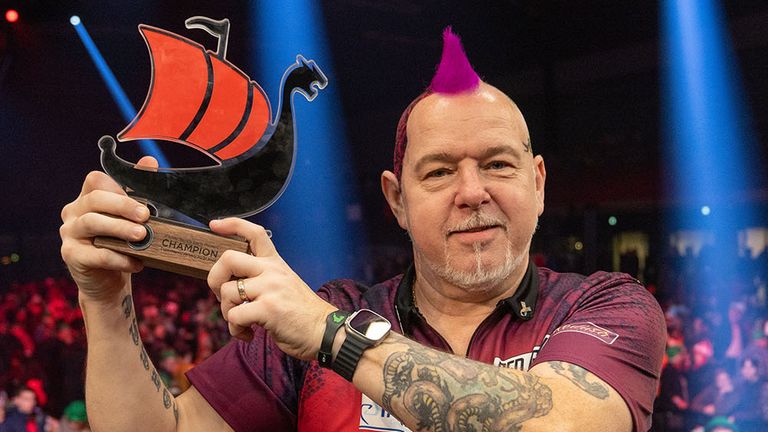 Peter Wright picked up his first televised title for over a year by triumphing in the Viaplay Nordic Darts Masters on Saturday night, seeing off Gerwyn Price 11-5 in the Copenhagen final.

Wright endured a difficult 2022 after claiming his second World Championship title, but returned to form in encouraging fashion to claim a fourth World Series of Darts title.

He followed up Friday’s narrow first round win over Dennis Nilsson at Forum Copenhagen by going all the way to a deciding leg again in his quarter-final tie with Michael van Gerwen.

The Scot then overcame World Champion Michael Smith 11-8 in the semis, having raced into a 4-0 lead before Smith showed his quality to level after 10 legs. Wright then pulled clear in the second half of the game to move into the final.

Wright also made an outstanding start against Price, finishing 104, 149 and 140 as he stormed into a five-leg lead. Price took two of the next three with legs of 13 and 14 darts to hit back to 6-2, then responded to Wright claiming the next three by firing in checkouts of 140 and 156 to reduce the gap to 9-5.

A missed bullseye, for a 121 finish, allowed Wright to land tops for a 13-darter as he moved a leg away from the title, and another miss from Price – this time at tops – allowed him to post double eight and seal the title.

“It’s lovely when darts go like that – I just felt unbeatable,” admitted Wright. “It doesn’t matter who was in front of me. I feel really good. The way I felt, no-one was going to touch me in the final – the darts were flowing.

“Gezzy’s [Gerwyn Price] a fantastic player, he was in the final in Bahrain last week and he’s beaten me the last four times I played him, so I’ve got one back!

“To beat the best players in the world is brilliant. To be invited to play on the World Series, I’m grateful, and the amazing crowds make the difference. Last year was a bit tough so let’s get on it and start winning! This will give me confidence for the Masters next week.”

Price’s run saw him reach a second successive World Series final, after losing out to Smith in the decider in Bahrain last weekend.

The Welshman ended Dimitri Van den Bergh’s title defence with a clinical 10-7 quarter-final win, before coming from 2-0, 6-3 and 9-7 down in the semis to defeat Jonny Clayton 11-10.

“I wasn’t in the final,” said Price. “I won five legs but probably should have won one, but Peter [Wright] was playing fantastic and all credit to him. He was great in the final.

“I was burned out in this one – I just had no fight in me, I sort-of rolled over and had my belly ticked, and Peter won so fair play to him. I’ll come good, I’m playing well and doing alright. The fans are fantastic – it’s been great here and in Bahrain.”

Smith’s first defeat as World Champion came in the last four against Wright, after he had proved too strong for Luke Humphries in the last eight.

Clayton was Saturday’s other quarter-final winner as he swept aside Rob Cross with a 10-4 success, only to miss out narrowly to Welsh rival Price for a second event in a row.

The focus now moves to the 2023 Cazoo Masters, which will be held from January 27-29 at the Marshall Arena in Milton Keynes, before the new Premier League season at the SSE Arena in Belfast on Thursday February 2.

The iconic Belfast venue famously saw Price hit two nine-dart finishes on the same night in the 2022 Premier League and will now stage the opening night for the first time, with the season running every Thursday until the Play-Offs at The O2 on May 25.

Watch every week of the 2023 Premier League season live on Sky Sports!